'Sometimes I read it and get a good laugh out of it, but I don’t take it to heart,' says the Storm goalie of criticism he received on social media during the world juniors
Jan 23, 2020 7:00 PM By: Tony Saxon 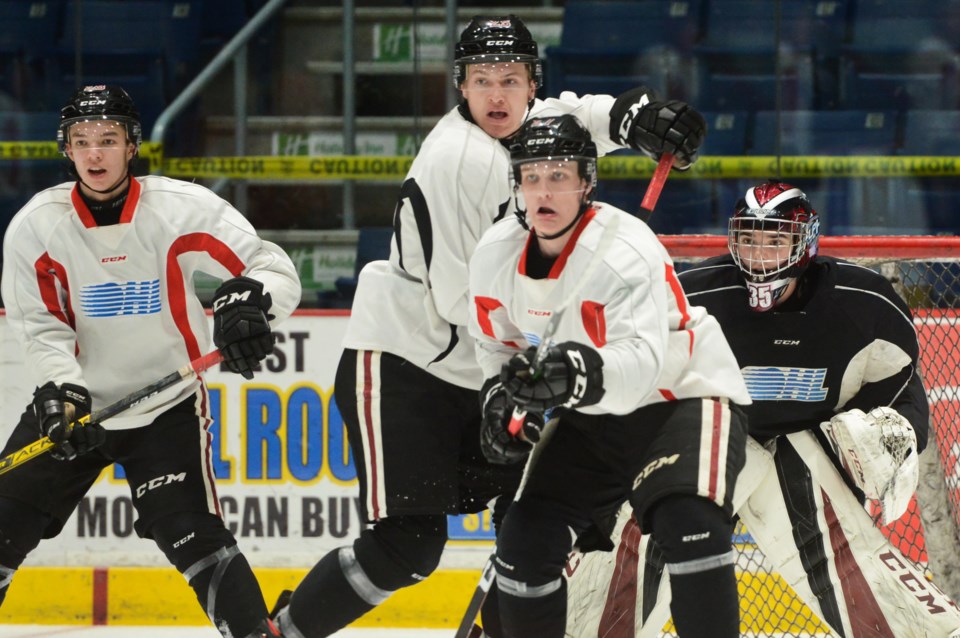 It has been a season of discovery for Nico Daws.

The Guelph Storm goaltender returns to the ice this weekend after missing most of the past two weeks with an oblique muscle strain in his ribcage.

That came via the social media backlash he experienced after allowing four goals in a little over a period of action against the Russians at the World Juniors.

“You just try not to look at social media. Obviously it’s hard because it’s everywhere, but you don’t read too much into it,” Daws said of how he dealt with that negativity.

“Sometimes I read it and get a good laugh out of it, but I don’t take it to heart.”

Canada winning gold at the world juniors helped him come back from the tournament feeling very positive and put aside the fact he struggled at times during the tournament.

This week he’s been busy shaking off the rust.

He has played precisely 102 minutes and 18 seconds of hockey in the last month, including just one period since returning from the Czech Republic.

But Daws said he’s “all good to go” when the Storm looks to snap its seven-game losing skid Friday night against the Flint Firebirds.

“Not bad, I’m getting there,” he said when asked how his rib muscles felt after practice on Thursday. “After this weekend I’m sure they’ll be a bit better.”

It doesn’t matter that it’s mid-season and Daws has played 21 games. For a goaltender, any extended period of inactivity can lead to losing an edge.

He practiced all week.

“I’m definitely a little bit rusty. Just getting back into the routine, practicing every day, working out. I’ll get used to it pretty quick,” Daws said.

“It will definitely be good to get back into it, get on the ice and get my confidence back. When you don’t see pucks for a while it’s a whole new game. It’s been a grind, but I'm feeling pretty good right now and ready to go this weekend.”

The Storm plays in Flint on Saturday night and in London on Sunday.

In first place at the Christmas break, the team now sits in sixth place in the log jammed Western Conference.

Daw has said several times that this season has been a bit of a roller coaster ride, from not being chosen in the NHL draft and wondering what his role in Guelph would be to turning in an amazing first half of the season that made him one of the country’s elite junior goaltenders.

“It’s been a crazy last month. Obviously a lot of highs and a lot of lows,” he said.

“I’ve been able to keep an even keel over the last month and I’m just hoping to stay that way.

“It’s easy to get overconfident after a good game and get down on yourself after a bad game, but as a goaltender you’ve got to be able to stay even keeled and not let any noise get in your head and power though.”