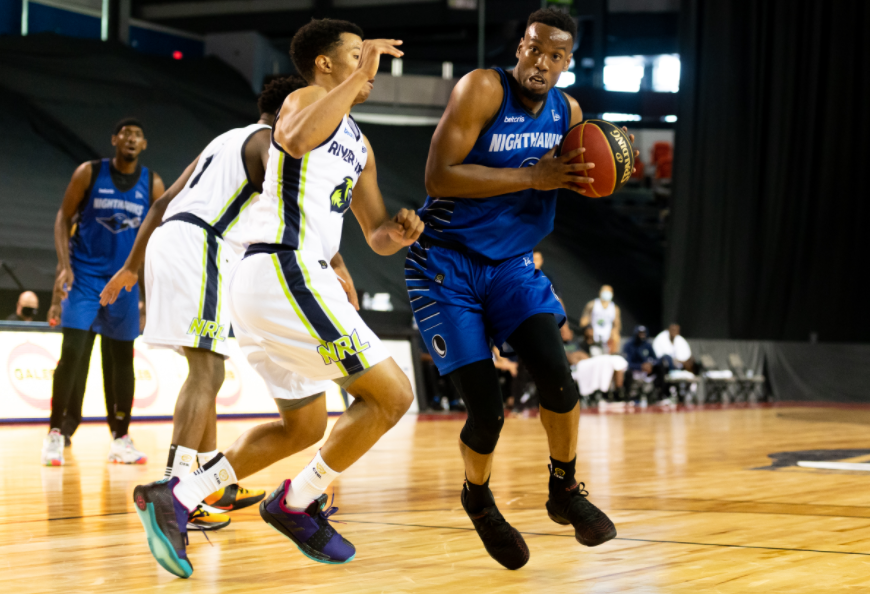 ST. CATHARINES – Both the Niagara River Lions and Guelph Nighthawks entered the CEBL Summer Series with high hopes and great expectations. For Guelph, the Summer Series offers an opportunity to reward a faithful fanbase that stuck by the team during the CEBL’s 2019 inaugural season, despite finishing 6-14.

For Niagara, the 2020 campaign brings with it a chance to reward a fanbase that is hungry for the team to reach the promised land after cruising through the 2019 regular season, only to come up short in last year’s semi-final contest at Championship Weekend in Saskatoon.

The River Lions and Nighthawks earned convincing victories in their opening games, defeating Hamilton and Ottawa by double digits, respectively, only to falter in their follow up contests against Saskatchewan and Hamilton.

Tuesday night’s action offered an opportunity to get back in the win column and both teams opened the game eager to find their rhythm; however, it was Guelph that managed to find its stroke when it mattered most as the Nighthawks forged ahead past the River Lions to claim an 84-65 victory.

“We’re trying to hold each other accountable and get better so everybody challenged each other today and we did a very good job,” Nighthawks head coach and general manager Charles Kissi said. “Everything is one game at a time right now. It’s not like we’re looking to the playoff rounds right now, we’re just focusing on the next game, trying to take care of bodies – these guys have been working extremely hard.”

Each team came out of the gate looking incohesive as a team. Isolation basketball, turnovers and three-point attempts early in the shot clock plagued both squads as each team shot below 40 per cent from the field, below 30 per cent from three-point range and committed 22 combined turnovers in the game’s first 20 minutes.

Fortunately for the River Lions, Niagara ended the first half on a 5-0 run behind a three-pointer by big man Sam Muldrow and a pretty pull-up baseline jumper from Kassius Robertson. The late spurt allowed Niagara to claw to within one point of Guelph at the break, due largely in part to Guelph’s inability to find the open man, recording only four assists in the opening two quarters.

The Nighthawks found their stride in the third quarter as they ended the frame on a 9-3 run.

“We have to know ourselves. We are individually a great group of players, but as a team we’re even better, so defensively and offensively we just need to have that mentality,” Olu Famutimi said.

A lay-up by Daniel Mullings to open the final frame cut the score back to single digits, but an eight-point deficit would be as close as Niagara would get as Guelph poured on 27 points in the fourth to outpace Niagara behind 12 second half assists.

Niagara and Guelph will both enjoy two days off before taking the court again on Friday. Guelph will play Saskatchewan.