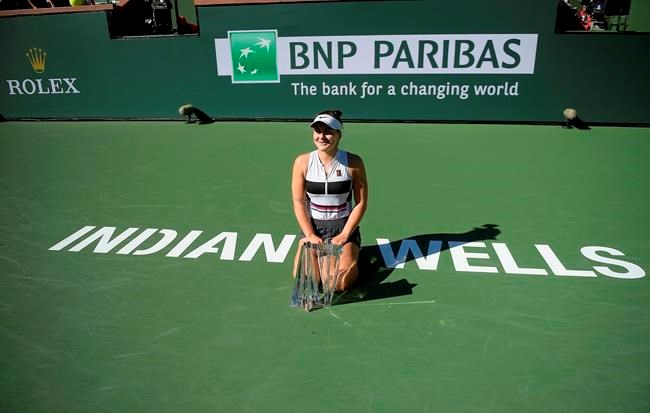 TORONTO — Bianca Andreescu has turned Carling Bassett-Seguso back on to Canadian women's tennis.

Andreescu won her first WTA Tour event Sunday when she upset eighth-seeded Angelique Kerber of Germany — the defending Wimbledon champion — 6-4, 3-6, 6-4 to win the BNP Paribas Open in Indian Wells, Calif. The 18-year-old from Mississauga, Ont., became the first wild-card entry to capture the tournament title and first teen to do so since American Serena Williams in 1999 and 2001.

Andreescu has been the talk of women's tennis this season, having won 28-of-31 matches. The Canadian began 2019 ranked No. 152, but has jettisoned up to No. 24 in the world as of Monday.

Andreescu still has some work to do to join Bassett-Seguso and Eugenie Bouchard as the only Canadians to crack the top-10 women's rankings. Bassett-Seguso reached that lofty plateau in March 1985 when she was ranked No. 8 overall, but has no doubt that Andreescu's best tennis remains in front of her.

"I think she's going to continue to improve," Bassett-Seguso said from Florida on Monday during a telephone interview. "This girl seems like she has building blocks.

"She's making me watch again. This obviously brings a lot of excitement and awareness (to Canadian tennis) and she seems like she's a really solid girl so I think it's great. I wish her all the best, I'm right in her corner."

Bassett-Seguso has some friendly advice for Andreescu: Stick with what's working.

"At the end of the day, it all comes down to the passion of what you're doing and being happiest doing it," she said. "If you're not passionate about it, then it becomes a job . . . I mean, the world is her oyster now, just be happy doing it.

Bassett-Seguso has no concerns about Andreescu being able to handle the spotlight and attention she now commands.

"She's done her due diligence coming up to this," Bassett-Seguso said. "Eighteen is a good age because she's done the whole junior thing and gone to tournaments in places like Japan where there's the whole language thing and you're away from home.

"She obviously has a good head on her shoulders because she's only 18 and going from Japan right through the (BNP tournament) draw just shows you right there she's really done what she's needed to do. If I were to put my money on it, I'd think she's going to do just fine."

Bassett-Seguso, 51, won two WTA singles events and a pair of doubles titles during her career and in 1984 reached the U.S. Open semifinals. She was named the WTA's most impressive newcomer in 1983 and Canada's top female athlete in 1983 and '85.

Canada's Alphonso Davies helps Bayern beat Dortmund 3-2 to lift German Super Cup
Sep 30, 2020 5:14 PM
Comments
We welcome your feedback and encourage you to share your thoughts. We ask that you be respectful of others and their points of view, refrain from personal attacks and stay on topic. To learn about our commenting policies and how we moderate, please read our Community Guidelines.