MONTREAL — A new roof for Montreal's Olympic Stadium will serve as a reminder of the perils of unchecked ambition and vanity but also as a sign of confidence in the future, says the head of the agency that oversees the facility.
Nov 10, 2017 5:28 PM By: Canadian Press 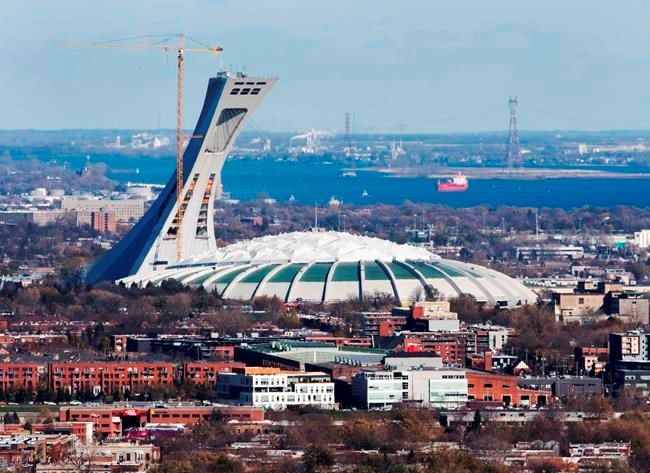 MONTREAL — A new roof for Montreal's Olympic Stadium will serve as a reminder of the perils of unchecked ambition and vanity but also as a sign of confidence in the future, says the head of the agency that oversees the facility.

Citizens have debated for years what to do with the mass of concrete, which can't host events during the winter months due to fears its roof will collapse under the weight of snow and ice.

But the structure itself is visually stunning, looking like a vertically segmented flying saucer topped with a pointy white meringue cake with tips attached by cables connecting to the world's tallest inclined tower.

"A society that builds a structure that is so exorbitant — do we demolish it and forget, or do we take ownership of something our parents and grandparents created, with its highs and lows?" Michel Labrecque, president of the Olympic park, said in an interview Friday.

"There is a lot of modern Quebec in this building. Corruption, sabotage, labour strikes. We need to assume the past and not rehabilitate it. And we need to learn."

While the stadium itself was designed by French architect Roger Taillibert for the 1976 Olympics and as the future home of a Major League Baseball team, its roof was only completed in 1987.

The Kevlar top was made in 1974 in Germany and delivered to Marseilles, France, where it was stored for 10 years before being shipped across the Atlantic and tied together "by big sewing machines," said Labrecque.

Avant-garde for its time, the roof was designed to be vertically retractable with cables that lifted into a pocket of the inclined tower.

"The hierarchy of decision-makers came out with something that would have been rejected by a beginner architect," he said. "The idea of having a big arm that would suck in a (roof) ... this was, I believe, wrong from the beginning.

"We were rushed into a bad idea."

Friedman said then-mayor Jean Drapeau was "at the height of his popularity" after a successful Expo 67.

"Expo worked, the metro system worked — it's one of the most successful metros in North America — but (the stadium) did not work."

The project was plagued with delays, labour strikes, rampant corruption and ran so over budget and over schedule the province had to wrest control fom Drapeau to get it completed in time for the 1976 Olympics.

Quebec created a special tax on cigarettes to help pay off the loan to build the project, the final payment for which was made in 2006.

At $1.47 billion, the stadium, known colloquially as the Big O (or Big Owe by some), cost almost five times what had been promised.

The roof successfully retracted 88 times, said Labrecque, but the material often tore. In 1991 high winds caused a big rip in the Kevlar and it was replaced in the late 1990s.

But that roof turned out to be just as problematic, and it currently has 8,000 tiny holes, most of which Labrecque said are about the size of a dollar coin.

"It looks like a face filled with chicken pox," he mused.

The stadium, however, can fit roughly 60,000 people and is the largest of its kind in the province.

Friedman says cities need to have "a big living room" where citizens can gather for large-scale events.

Quebec's announcement this week it would soon begin accepting proposals for a new roof is a sign the society is ready to take ownership of the past and create something new and sustainable, Labrecque said.

The stadium is located on a massive piece of land and surrounded by the new Planetarium, the Biodome and Insectarium, as well as the Saputo soccer field, home of the city's MLS team.

"I think the Olympic Stadium has a silver lining — it taught us not to get stuck in grand visions," Friedman said.

City leaders, he added, need to have a big, macro vision for the city, but should consider smaller-scale and more manageable projects as opposed to massive undertakings that spiral easily out of control.

Labrecque, however, isn't quite ready for Montreal to stop thinking big.

"We just need to remember," he said. "And read, and learn, and if we re-embark on a big project, let's be very, very attentive."