Canadian fighter Gillian (The Savage) Robertson, ranked 12th among UFC flyweights, returns to action next month against No. 10 Andrea (KGB) Lee at UFC 256. The 25-year-old native of Niagara Falls, Ont., who fights out of Coconut Creek, Fla.
Nov 21, 2020 12:20 PM By: Canadian Press 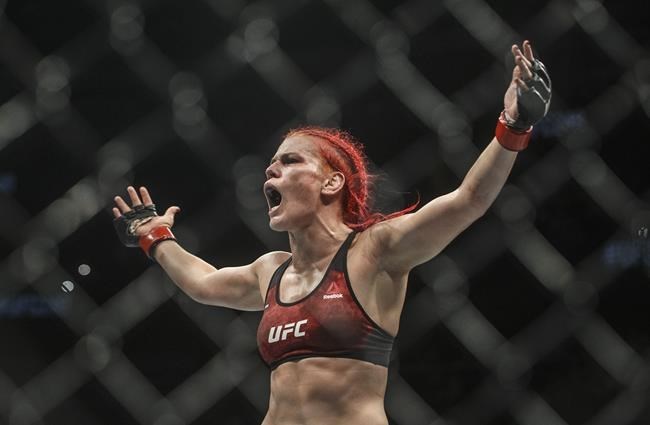 Canadian fighter Gillian (The Savage) Robertson, ranked 12th among UFC flyweights, returns to action next month against No. 10 Andrea (KGB) Lee at UFC 256.

The 25-year-old native of Niagara Falls, Ont., who fights out of Coconut Creek, Fla., is coming off a dominant win over Brazil's Poliano Botelho on Oct 17. It was her second straight victory and fourth in her last five fights.

UFC 256 is scheduled for Dec. 12 at the UFC's Apex production facility in Las Vegas. While the main event has yet to be confirmed, the UFC has said it is working on a bantamweight title fight between 135-pound champion Petr Yan and No. 1 contender Aljamain Sterling.

Also on the card, Canadian featherweight Gavin Tucker faces Billy Quarantillo in a bout originally scheduled for April but delayed by the pandemic.

Tucker (12-1-0) won a US$50,000 performance last time in choking out Justin (The Guitar Hero) Jaynes in August. The 34-year-old from Ship Cove, N.L., who fights out of Halifax, has won two straight and three of four UFC fights.

Quarantillo (15-2-0) has won eight straight including three in the UFC. He knocked out Canadian Kyle (The Monster) Nelson last time out in September.

Cirkunov (15-5-0) has not fought since September 2019 when he defeated Jimmy (The Brute) Crute via the rarely used Peruvian Necktie submission. The 33-year-old Cirkunov, who had lost three of his previous four bouts, is 6-3-0 in the UFC.

Spann (18-6-0) had his four-fight UFC win streak snapped last time out when he was knocked out by Jimmy Walker, who also holds a 2019 KO win over Cirkunov.

Zahabi, a 33-year-old from Laval, Que., is the younger brother of storied trainer Firaz Zahabi and has lost his last two fights after winning his UFC debut against Reginaldo Vieira in February 2017.

Rodriguez (7-1-0) is making his UFC debut after winning a contract on Dana White's Contender Series via a first-round submission of Leomana Martinez.

Chimaev, a Russian-born Swede, needed a total of just nine minutes, 38 seconds to win all three of his fights since making his UFC debut in July. He moved up to middleweight last time out, knocking out Gerald Meerschaert in 17 seconds.

The 26-year-old Chimaev has won all nine of his pro fights.

This report by The Canadian Press was first published Nov. 21, 2020

Wheeler has two goals, two assists as Winnipeg Jets clinch third in North Division
May 12, 2021 12:53 AM
Nurse hopes his players remember the disappointment of missing the playoffs
May 11, 2021 11:08 PM
Comments