PITTSBURGH — Barry Trotz had questions when he took over the New York Islanders last summer. About the defence . About the goaltending. About where the scoring would come from if star John Tavares bailed in free agency.
Apr 16, 2019 11:50 PM By: Canadian Press 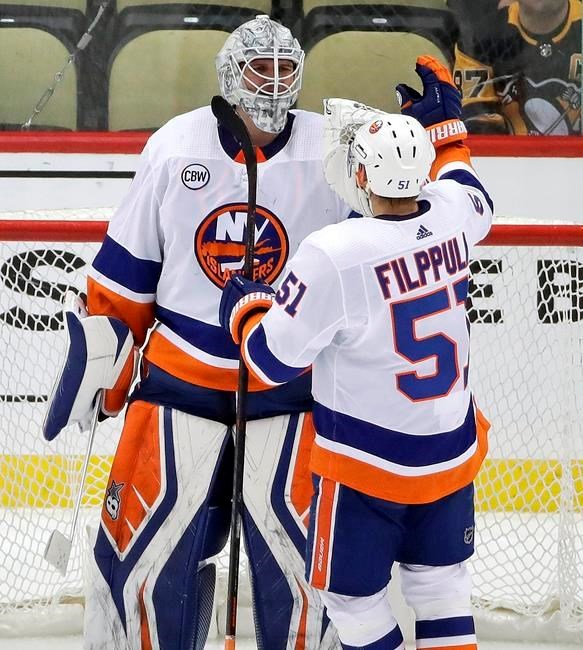 PITTSBURGH — Barry Trotz had questions when he took over the New York Islanders last summer. About the . About the goaltending. About where the scoring would come from if star John Tavares bailed in free agency.

One by one over the last 10 months, the Islanders have answered them all. The team that couldn't stop anyone a year ago is now the team that stops nearly everyone — Sidney Crosby and the Pittsburgh Penguins included.

Four games. Four wins, each one more impressive than the next, culminating in a typically gritty 3-1 victory in Game 4 on Tuesday night that finished off a stunning sweep of the Penguins and sent the Islanders into the second round of the playoffs for just the second time in 26 years.

"It's not like we came in and thought we were going to win it in four games," said New York goaltender Robin Lehner, who stopped 135 of the 141 shots he faced in the series, including 32 of 33 in the clincher. "But we felt confident coming in playing against these guys. We really did."

The Islanders trailed for less than five minutes across four games, responding every time Pittsburgh made a push. When Penguins forward Jake Guentzel scored 35 seconds into the first period to give Pittsburgh an early jolt, Eberle responded 1:34 later to tie the game. The Islanders never trailed again, taking the lead for good on Brock Nelson's third of the playoffs late in the first period. Josh Bailey flipped in an empty-netter with 38 seconds to go in the third.

"It's kind of been the staple," said Eberle, who had four goals in four games. "They score and we're able to respond in a timely fashion. Just a lot of commitment at the end of the game, some blocks, some huge sticks preventing and a big kill. That's the Islander way to win."

New York will face either Washington or Carolina in the second round. Trotz led the Capitals to the franchise's first Stanley Cup last spring but downplayed the idea of a rematch. At least for now.

"That's a special group that will always be a part of me," Trotz said. "But if we end up playing them, they're the opposition."

Pittsburgh began the playoffs looking for the franchise's third Stanley Cup in four years. The Penguins managed just six goals while getting swept in the opening round for the first time since 1972.

"It's a tough loss for us, but we have to learn," Pittsburgh forward Evgeni Malkin said. "Next year, we need to understand there are young guys, they're hungry. Every team tries to win. We're not champions anymore."

The Islanders hired Trotz last summer just days after he lifted the Cup with the Caps. He immediately began a makeover that put a premium on preventing goals rather than scoring them. New York signed Lehner to a one-year deal in the early days of free agency.

The 27-year-old used it as a chance to jump-start his career, teaming with Thomas Greiss to serve as the backbone of a club that allowed the fewest goals in the league during the regular season. Lehner then backed it up with 12-plus periods of sound hockey that left Pittsburgh baffled.

Penguins forward Patric Hornqvist's frustration briefly bubbled over in the second period. Tired of getting whacked at by Lehner, the fiery Swede started a shoving match that flirted with turning into a full-blown fight. While it briefly gave Pittsburgh a spark, it didn't translate to the scoreboard. Not much did for the Penguins, whose 13th straight playoff appearance lasted all of seven days.

"It boils down to critical moments, making the right plays at the right time," Pittsburgh coach Mike Sullivan said. "We didn't play as well as we're capable."

New York's system that forced the Penguins to go through layer upon layer of players certainly helped. The Islanders' forecheck flustered Pittsburgh early in the series, and the Penguins never really got comfortable.

"They're a team that's built on first and they've certainly bought into that and that's their identity," Sullivan said of the Islanders. "I think our identity is different based on the personnel that we have. Having said that, it's hard to win in the playoffs when you don't defend and you don't take care of the puck."

That problem popped up once again in the decider. Shortly after Guenztel's goal brought the 574th consecutive home sellout to its feet, Pittsburgh Kris Letang tried to pinch at the blue line to keep the puck in the New York zone. The puck hopped over his stick and went to Eberle, who finished off a 2-on-1 by ripping a shot by Murray's glove.

Just like that, the Islanders had the momentum again. And just like in Games 1-3, they didn't give it back.

A little bit of puck luck helped. Crosby hit the inside of the left post in the middle of the second period, and Islanders Scott Mayfield bailed out Lehner by making a save with his left leg on a point-blank shot by Phil Kessel early in the third.

And that was it. When Bailey's flip went the length of the ice and into the empty net, the Islanders' bench erupted and the Penguins trudged toward an that could lead to significant changes.

NOTES: New York F Cal Clutterbuck and D Johnny Boychuck both left in the second period with injuries and did not return. ... Crosby's assist on Guentzel's goal moved him past Hall of Famer Steve Yzerman and into 10th place on the NHL's all-time playoff points list (186). ... Pittsburgh went 0 for 3 on the power play and finished 1 for 11 in the series with the man advantage.

The Islanders face the winner of the series between the defending Stanley Cup champion Capitals and the Carolina Hurricanes. Washington leads 2-1.

Will Graves, The Associated Press

Rangers buy out star goaltender Henrik Lundqvist's contract
Sep 30, 2020 3:56 PM
Comments
We welcome your feedback and encourage you to share your thoughts. We ask that you be respectful of others and their points of view, refrain from personal attacks and stay on topic. To learn about our commenting policies and how we moderate, please read our Community Guidelines.