The New York Rangers in less than 72 hours lost their best player to injury, fired their president and general manager, and will likely see another player suspended.
May 6, 2021 4:52 PM By: Canadian Press 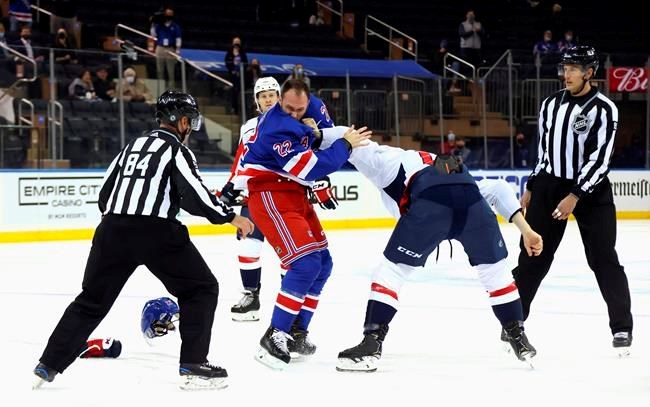 The New York Rangers in less than 72 hours lost their best player to injury, fired their president and general manager, and will likely see another player suspended. They are also out a quarter-million dollars in the latest chaotic chapter for the storied franchise.

The NHL fined the Rangers an extraordinary $250,000 on Thursday for what Commissioner Gary Bettman called demeaning personal comments made publicly about head of player safety George Parros. It’s believed to be the largest publicly announced fine of its kind in NHL history.

The uproar dates to Monday, when Washington’s Tom Wilson was involved in a scrum against the Rangers that left New York star Artemi Panarin injured and unable to finish the final three games of the season. Wilson was fined $5,000 for roughing against Pavel Buchnevich but not suspended, prompting the Rangers to issue a statement calling the decision a dereliction of duty and saying Parros was unfit to remain in his job.

Playing two nights after Wilson threw Panarin to the ice, the Rangers and Capitals racked up a combined 141 penalty minutes in a fight-filled game Wednesday night. The six fights in the first five minutes were the most of any game in league history.

Buchnevich was thrown out of the game for cross-checking Capitals forward Anthony Mantha in the second period and had his own hearing with the department of player safety Thursday. He could be suspended for the final two games of the season.

It was not clear how much the Wilson-Panarin incident and statement had to do with Dolan's decision. He said simply that "in order for the team to succeed in the manner our fans deserve, there needs to be a change in leadership.”

Drury will get a hand from longtime hockey executive Glen Sather in his transition. With a new regime in place and growing expectations for the Rangers in their rebuild, a coaching change could be next with more moves coming this summer.

“We’re going to look everything and try to figure out how best to take the next step forward,” Drury said. “It’s been well-documented everything the team has gone through on and off the ice, and we’re going to take a look at every aspect of the organization when things end and we’ll start that process next week.”

Self Storage Move In Special
Open for Walk-ins