Growing pains Part 3: the balancing act of jobs and houses

Growing Pains is a three-part series examining the challenges Fergus and Elora face as more people see them as a place to call home
Apr 7, 2021 12:00 PM By: Keegan Kozolanka 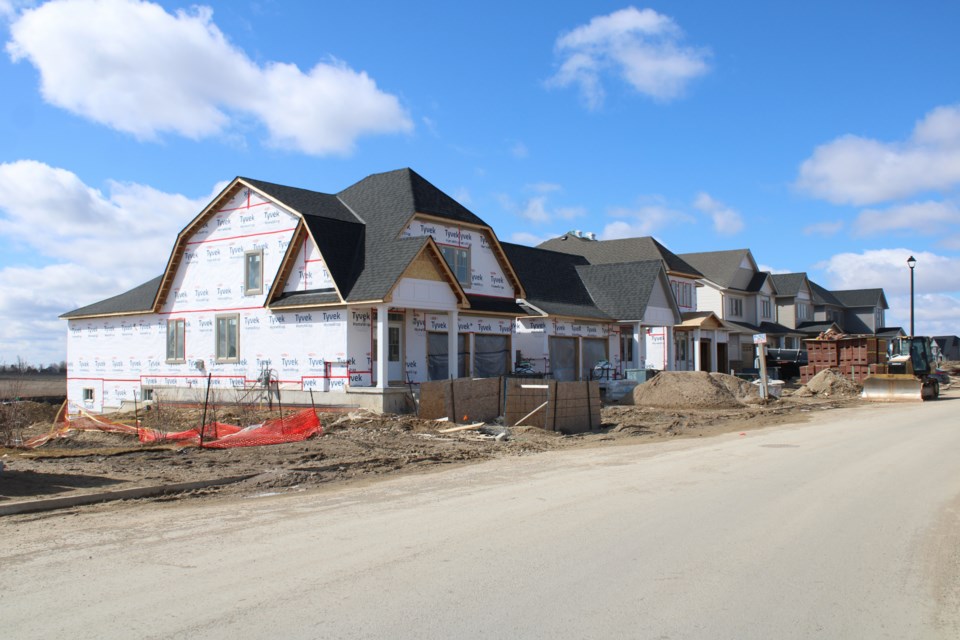 A row of semi-detached units going up in the Storybrook subdivision. Some are concerned the focus is too much on new housing rather than bringing in jobs.Keegan Kozolanka/GuelphToday

There was a time when Fergus and Elora weren’t largely commuter towns.

Councillor Bob Foster remembers being a boy in the 1970s when Fergus was a farming and industrial town.

“Everyone lived and worked here almost, not like today where a lot of our workforce are commuters,” Foster said.

The 1971 Census of Canada put the Town of Fergus’ population around 5,400 and Foster figured at least 1,500 people were employed at the Beatty Brothers plants that no longer run.

The town has grown since then and has been amalgamated with Elora, Nichol Township and parts of Eramosa and West Garafraxa Township into the Township of Centre Wellington

It continues to grow, but some are seeing a gap between residential growth and other types of growth that help cover the cost of it.

Centre Wellington has been mandated to grow in population and housing, which means more people will be looking for work locally.  They will also need schools and a host of other services.

The County Official Plan has put total employment in Centre Wellington at just under 12,000 for 2016 and set a target for around 23,000 by 2041. This includes jobs that have “no-fixed address.”

Fred Gordon, whose historic property will eventually be surrounded by a new subdivision, is wondering where the jobs are.

“What we are essentially doing is creating a community that has high residential counts but low jobs and that means people live here but don’t – it’s a bedroom,” Gordon said. “Everybody needs a place to live but I think a healthy community would show people living and working in one community.”

Mayor Kelly Linton acknowledged the town will always be a bedroom community in some regard due to the proximity to larger urban centres.

However, Linton doesn’t want this to be the case and said it's better in the long-run to get residents to really value where they live.

“We want people to be able to live, work and play in Centre Wellington. You want people invested in the community,” Linton said. “People who live here and work here, this community means more to them.”

It’s the reason why the township bought 58 acres off First Line in Fergus to develop its first business park.

“We wanted to take that deliberate action to purchase, service and then market and sell land where businesses can come and relocate to,” Linton said.

Linton explained the municipality had never been in the business of buying and selling land previously, but stepped in when it was clear developers weren’t going in this direction.

“You were getting lots of houses, lots of new subdivisions but we aren’t getting the businesses to make sure that growth is balanced,” Linton said.

Linton said the same thing that appeals new residents to the area works for businesses and industry.

This means marketing the quality of life residents have in the charming small town.

“Businesses want employees who like to work in the community they’re setting-up shop,” Linton said.

“Another huge benefit of Centre Wellington is we don’t just have one really great historic downtown, we have two.”

The existing businesses in the downtowns and throughout the township aren’t ignored as they play a big role in the atmosphere of Centre Wellington.

Whether that be grants and support during COVID or an ongoing relationship with the chamber of commerce and BIAs, the mayor said deliberate actions keep towns lively.

Linton said you don’t have to go too far to see this.

“What used to be thriving commercial centres are now dead,” Linton said. “We don’t have that in Elora and Fergus and that just didn’t happen by accident.”

Linton acknowledges the ratio between residential and commercial taxes is weighed too heavily on residents.

“If you look at some of the most successful municipalities, they have a balance in their tax rate and we have to do better on that for sure,” Linton said.

“We don’t want our residents to be carrying the ball when it comes to the taxes they pay. We want businesses in here making good money, making a great livelihood for the employees but also contributing to our tax base.”

A growing town also has increased infrastructure needs but this doesn’t usually fall on existing taxpayers.

Wilson explained growth related costs are paid by those that trigger this growth through development charges.

“Also, we have a Local Service Policy that clearly outlines whether the Township, developer/builder, or development charges are responsible for funding these capital costs.”

Marianna Iglesias, senior planner with the township, said planning for this growth is not new to the township.

The township uses master plans to identify when and where various infrastructure needs to upgrade.

More people and houses means more cars on the roads.

Colin Baker, managing director of infrastructure, said the township’s Transportation Master Plan defines and prioritizes policies, programs and infrastructure requirements to 2041 and beyond.

He said recommended upgrades typically include intersection improvements in the form of turning lanes, traffic signals or roundabouts, upgrades to improve traffic flow and active transportation and new collector and arterial roads to serve the growing community.

Other day-to-day needs such as wastewater and water are accounted for too.

Baker said the township has identified a need to upgrade Fergus’ wastewater treatment plant in the second half of this decade but Elora’s underwent a significant expansion years ago.

School boards are also eyeing an expansion in Centre Wellington to serve the needs of the community’s growing number of children.

There is a designated school site in the Storybrook subdivision in northwest Fergus and UGDSB administrative officer Megan Sicoli said the board has the option to purchase this site.

However, the UGDSB needs to receive capital funding from the Ministry of Education to build a school and a previous business case submitted in 2019 did not receive funding approval.

At this time, neither the UGDSB or the Wellington Catholic District School Board have identified a need for a new high school in the area.

There is a lot to consider when it comes to a growing small town. Mayor Linton said properly managing this is probably the most important task they have for the long-term.

But the town will grow and Linton said he values maintaining what makes the area special.

“I’ve grown up here and this town means a lot to me and my family,” Linton said. “I want to be proud of Centre Wellington in 10 or 20 years. I want this to be a community I can be proud of and I know a lot of other people feel that way. That just means we have to do the right thing.”

MONDAY Part 1: Is Centre Wellington in danger of losing its small town charm?