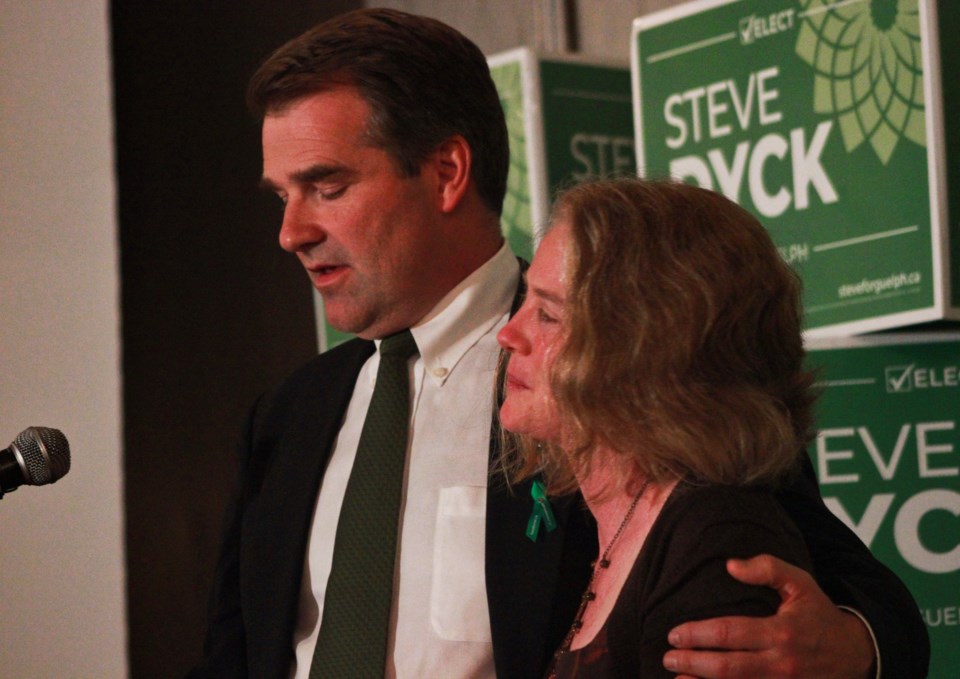 “Well, this is not the outcome we’ve been working towards,” said Green Party candidate Steve Dyck as a room of approximately 100 supporters chanted ‘'Steve" and "thank you" Monday night following a crushing loss in the local election.

The election results gathering for the Green Party was held at the Holiday Inn on Scottsdale Drive as supporters gathered together to cheer their chosen candidate.

However, the outcome was not as many of them expected.

With a handful of polls remaining to be reported early Tuesday morning, Dyck finished second in the race to incumbent MP Lloyd Longfield.

Dyck doubled the percentage of Green votes from the last election, but it wasn't enough.

He said the results of the election left him disappointed and surprised.

“The response at the door was so positive,” said Dyck.

“I worked hard to lift up a bevy of candidates to seek the nomination in Guelph and we had such a phenomenal nomination process.”

Dyck said in no way has his motivation to work towards a Green Guelph ended.

“I will be doing the exact same thing. I will be building this community you know whether that’s in terms of social justice, in terms of the clean economy for the next four years really hoping that Lloyd is successful in working towards an economy that’s prosperous for future generations,” said Dyck.

When asked if he will run in another four years, Dyck said it is a possibility as he will continue to be an advocate for the organizations he is a part of in Guelph as they motivate him to bring change.

“You know what? We’ll see that. That’s up for the Guelph marines to decide. Here is hope. We have some amazing new candidates coming forward,” said Dyck.

He stressed the importance of MPP Mike Schreiner’s work for Guelph saying he laid an important foundation for the Green Party in Guelph— for which Dyck served as a chief fundraiser— when he became the first Green MPP of Ontario in 2018.

“Mike never gave up. When they told him a Green would never get elected, he just kept knocking on doors,” said Dyck on stage as the crowd cheered in support.

Dyck ended his speech thanking his supporters, volunteers and team saying this isn’t the ending. It is a new beginning.

“And I do congratulate Lloyd Longfield and his party and I wish him good fortune and the wisdom and courage to be the voice that Guelph needs," said Dyck.

NDP candidate proud of how she ran her first political campaign
Oct 22, 2019 1:21 AM
Comments