Christian Heritage Party candidate Gordon Truscott says his signs are regularly ripped out of the ground
0
Oct 7, 2019 11:30 AM By: Tony Saxon 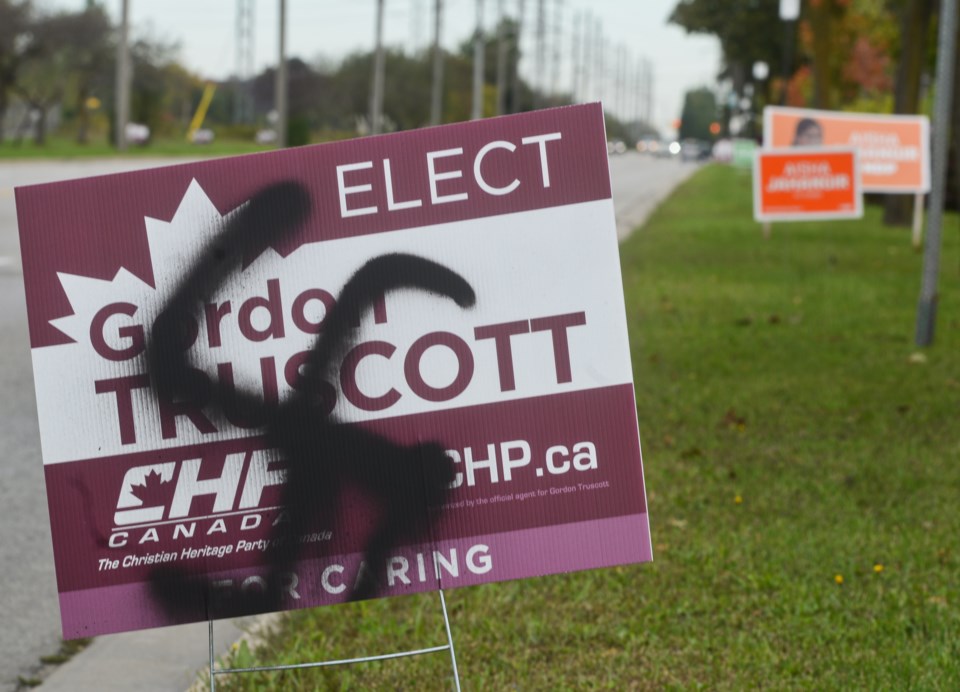 A number of Christian Heritage Party signs on Edinburgh Road were defaced over the weekend. Tony Saxon/GuelphToday

The Christian Heritage Party candidate for Guelph is concerned after swastikas were spray painted on several of his campaign signs over the weekend.

Gordon Truscott said he is considering contacting police after six signs were defaced along Edinburgh Road between Speedvale Avenue and Woodlawn Road.

"I haven't yet, but it's a good idea. I don't want to bother the police much, but I should do that and at least make them aware of it," Truscott said.

Having his signs damaged is nothing new, particularly in that area.

"I have the most signs in Guelph and people have been ripping them out of the ground, sometimes damaging the wires that they're put on, but no, this is the first time somebody has decided to paint something on them," said Truscott on Monday morning.

He said he travelled that stretch of road on Saturday and didnt notice any graffiti on his signs so he believes it happened either late Saturday night or Sunday.

"I don't know if it's just a prank or if people just have a strange misconception about our political party," Truscott said, adding that stretch of road has seen a higher instance of his signs ripped out of the ground since the campaign began.

Several other parties have signs along the same stretch of road but they were not vandalized.

"I have noticed that very few of the other candidates have their signs taken out of the ground. I'm kind of wondering about that. Why do I have the most signs damaged? I have to drive around daily (replacing signs)."

Truscott planned on replacing the signs "within the hour" when contacted Monday morning around 10 a.m.

"I guess it comes with the territory," he said. "I'm happy that people haven't done anything further than to rip up signs."

Green Party's Steve Dyck disappointed and surprised after losing to Liberals
Oct 22, 2019 1:21 AM
Comments
We welcome your feedback and encourage you to share your thoughts. We ask that you be respectful of others and their points of view, refrain from personal attacks and stay on topic. To learn about our commenting policies and how we moderate, please read our Community Guidelines.