Urban Cowboy: The bugs are emerging

How can you help not catching spring fever over the past couple of weeks? The average temperature in our region has been several degrees warmer than last year, the snow’s disappeared and the rain is making March seem much less winter-like than normal.

Even bugs are emerging. You’ll start seeing some fascinating-looking species, like the brown marmorated stink bug (BMSB), making their presence known around your house. The BMSB is one of many stink bugs; some are beneficial and prey on harmful pests, but this one’s a problem because it eats almost everything – cash crops, plants, fruit, you name it. 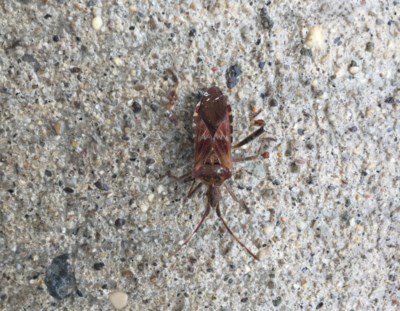 Its numbers have been rising in Ontario over the past five years. It was first found in Hamilton, where it likely hitched a ride from the eastern US. Now it’s found throughout the Highway 401 corridor; the movement of goods, vehicles and people is what allows the BMSB to spread.

I thought I saw one last week, but I was wrong. With its big back shield, it’s often confused with the western conifer seed beetle (pictured) which I photographed after I narrowly avoided stepping on it last week walking around the University of Guelph.

For farmers, insects like the BMSB reduce income. Crops can tolerate a certain threshold of insects before they start to cause significant damage, and researchers work to determine that number, so farmers can reduce pesticide use.

Besides staying ahead of insects, farmers are always trying to get ahead of the weather. Generally speaking, the earlier they plant (within reason), the better chance they have of getting higher production.

Right now, like the rest of us, they’re cooling their heels, waiting for spring to truly arrive. They’re holding back from going onto their fields, which need to be dry enough to get in so they can start managing pests like weeds (which are already starting to emerge), and get the ground ready for seeding.

So although it’s still early to tell, and although we might well get another snowfall or two, farmers are entering what looks like a pretty good year climatically.

The outlook is equally as positive economically.

A few weeks ago, Ottawa released its annual financial review of Canadian farms for 2015, and forecast for 2016.

It said farmers had a great year last year, and could expect another good one to come. Even though net cash farm income is expected to fall by nine per cent in 2016 to $13.6 billion – and that’s in a year when food costs are rising -- that’s still 14 per cent higher than the 2010-2014 average of $11.9 billion.

The review said the low Canadian dollar has improved the competitiveness of Canadian agriculture and food products in export markets – and we are a huge food exporter.

As well, working in farmers’ favour in 2015 was the cost of energy. According to Ottawa, lower crude oil prices significantly reduced farmers’ diesel and gasoline expenses. These prices are continuing to keep costs low now.

Looking further into the future, the report says an increase in global trade and greater demand for agricultural commodities by developing countries present opportunities to further grow Canadian agriculture.

Farming and food production depend on dozen of influences. Weather is one of the biggest. Here’s hoping the warmth we’ve experienced is here to stay.

How are Guelphites supporting local this holiday season?