Guelph Storm will play in Friday's semifinal at Memorial Cup

Will meet the Rouyn-Noranda Huskies for the chance to meet the Halifax Mooseheads in Sunday's championship game
0
May 22, 2019 10:36 PM By: Tony Saxon 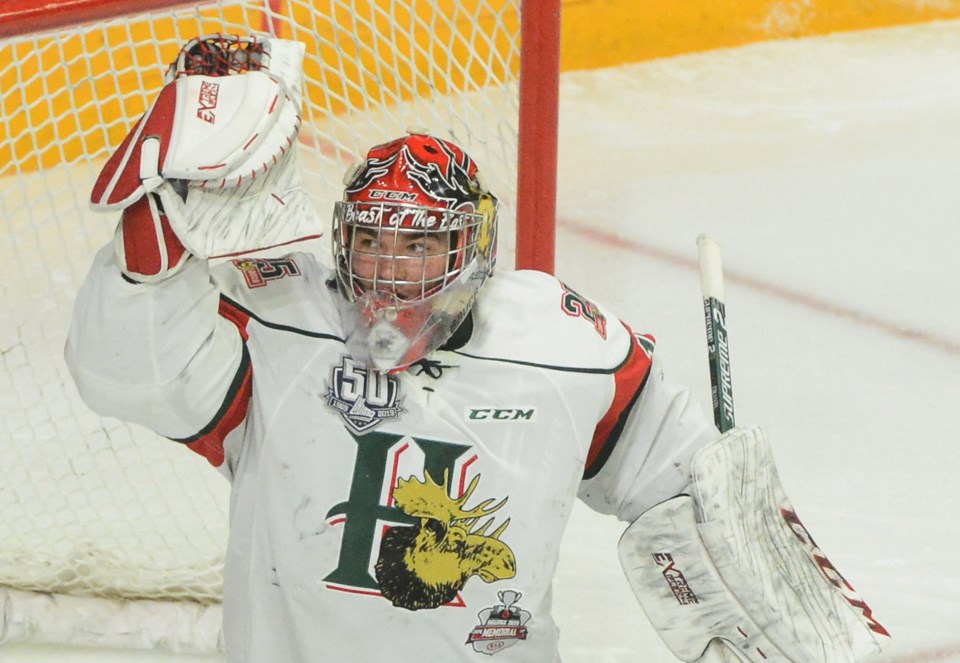 Alexis Gravel of the Halifax Mooseheads makes a glove save Wednesday at the Memorial Cup. Tony Saxon/GuelphToday

HALIFAX – The Guelph Storm will play in Friday night's semifinal at the Memorial Cup.

There had been a chance the Storm could advance straight to Sunday's final, but a 4-3 win by the Rouyn-Noranda Huskies over the Halifax Mooseheads  Wednesday night in the tournament's final round robin game means the Huskies and Storm will play in the semifinal.

All three teams finished with 2-1 records but Halifax gets the bye to the final based on the tournament's tie-breaking formula.

The Huskies' Jakub Lauko scored with 55 seconds left in the third period to put the Huskies up by one. Had they been able to make it 5-3 Guelph would have finished in first place, but it was not to be.

Guelph beat Rouyn-Noranda 5-2 in the round robin, the first game of the tournament for both teams.

"It's strange a bit, winning a game and being not happy," Huskies coach Mario Pouliot said after the game.

Halifax coach Eric Veilleux said his players surrendered their cell phones to him in the morning to avoid the social media chatter about the tie-breaking formula.

He said he didn't tell them what needed to happen until there was four minutes left in the game.

"I said we just need to play to win the game, play a solid game, then worry about the third period," Veilleux said. And then I told them it;s got to stay 4-3," Veilleux said.

Guelph Storm runs out of miracles (10 photos)
May 25, 2019 8:45 AM
Comments
We welcome your feedback and encourage you to share your thoughts. We ask that you be respectful of others and their points of view, refrain from personal attacks and stay on topic. To learn about our commenting policies and how we moderate, please read our Community Guidelines.