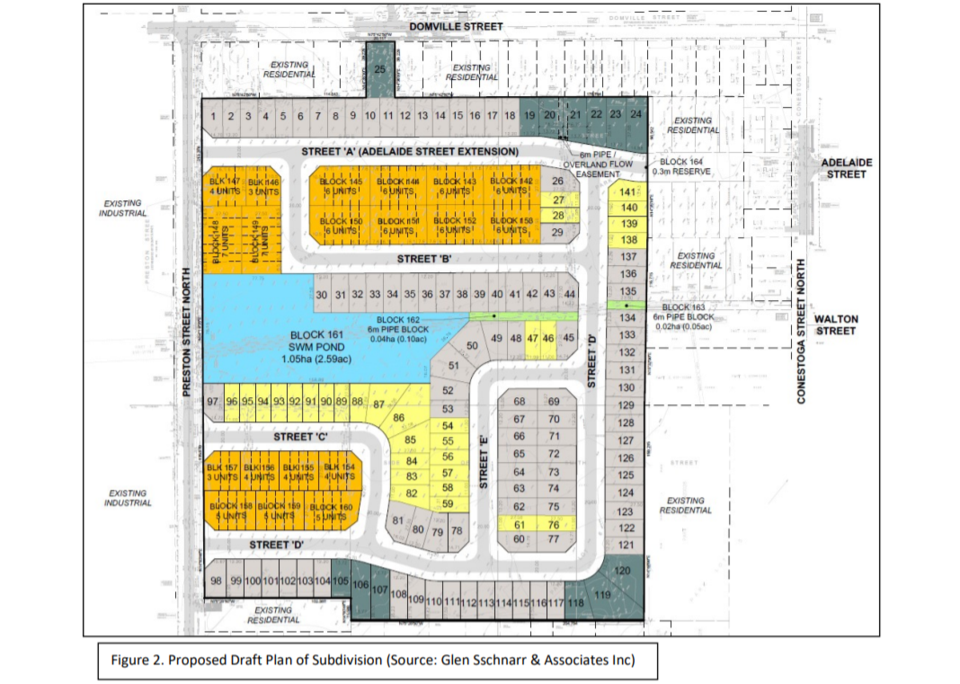 A draft plan of the proposed 240 house subdivision in Arthur.

ARTHUR – A large housing subdivision planned in Arthur raised some concerns from residents and councillors at a Wellington North public meeting on Monday night.

This will consist of 141 single detached and 99 townhouses as well as five new internal streets, a stormwater management pond and upgrading Preston Street to asphalt with a sidewalk.

The report to council noted a large portion of the land was approved for a subdivision back in 1993.

A similar development was proposed of single and townhouse units, about half the number currently proposed, but also included a large school block and park area.

The school block is no longer required by the school board.

Mayor Andy Lennox clarified that there was no decision being made and ultimately the County of Wellington is the authority on approving subdivision plans.

The purpose of the meeting, he explained, was to collect information for the county and to consider zoning changes to setbacks and frontage which would fall on the township.

Stephen Closs, a planning consultant for the developer, said that Arthur is intended to grow by nearly 1,000 people within 20 years and this development is an opportunity to reach this growth target.

A common theme among delegates, particularly those who live on Conestoga Street, at the public meeting was a concern over stormwater management.

Many mentioned concerns they have about their property flooding on occasion already and wanted clarification that things would not get worse with a new development where the water drains.

Marcus Gagliardi, Cachet Homes development planner, stressed that they are up to the challenge of working on this issue with township engineers and other organizations.

“We’re going to make sure the situation post-development is a much better situation than what currently exists,” Gagliardi said at the meeting.

Two delegates, Mike DeWitt and Brent McKee, were both troubled about wildlife that inhabits the field and forested area where the subdivision will go up.

They noted that there was no green space incorporated into the plan.

“Why do we always have to destroy everything for the sake of a couple extra houses?” DeWitt asked. “I think development is going to come regardless but could we not set something aside for the wildlife as well?”

Closs said ecological impacts will be mitigated but the land is already zoned as residential and is therefore intended to be developed.

Some councillors agreed that parkland should be considered as part of a subdivision this size.

The development as it stands is proposing cash-in-lieu of parkland but Gagliardi said they aren’t opposed to taking another look at it.

“The comments about park space are valid and we’ll have to take it back and look at it as we look at the overall plan,” Gagliardi said.

Some other councillor concerns were around the density of the development and if it would truly fit into the character of the small town.

The mayor finished the meeting by bringing up how they’re going to manage an increase in sewage.

“We’ve seen a number of development applications come forward and if it all comes to fruition we probably have a sewage capacity problem,” Lennox said, noting that the town has a sewage allocation policy that manages the rate of growth.